As at the beginning of using Hstouch, the possibilities of HST are fine, the realtime changes are very nice, but it isn't the perfect way to control stuff.. The standard graphics are made in the year 1900 and we have to create images by ourselves or use from each other.
The most annoying thing about Hstouch is missing scroll and swipe functions, we could expect in these years. Even with several phones, tablets, an even pc browsers, we use different resolutions. For each device we must create almost a new app.
I would like to have one app or website which can be opened at all devices, without restrictions.

My program skills are limited. Many years ago I wrote 'Hello World' in html, even in Turbo Pascal but that's it. The last 2 years I can also create and modify scripts in vb.net.
After searching the web I finished at Twitters Bootstrap. You can use one of the examples and change it according your needs. It's not a WYSIWYG editor, so everything had to be write in Notepad++ or something else.
But the first step was made.
Second step: how can I read the values from Homeseer? I can write a script that put values from each device in a database, but I've already Access databases from Homeseer and RFXCOM. Better solution, was a MySQL database. With the HS plugin Ultralog this was simply done, disadvantage: only devicevalues and devicestatus are saved. I don't have a clue how I can save devicestrings to it, maybe later or hopefully I don't have to use it.

Third step: Run a webserver to run the future webpages but also for the MySQL database. Joomla, yes ever heard of it. WAMP? XAMPP? Probably in one of the topics here I read about XAMPP. So I installed XAMPP (for PHP and MySQL).
Fouth step: Creating a website to read values and show them to me, oke, after some weeks all above was running, but how can I control the devices in Homeseer?

The 'circle' to have a peace of hardware, read the values in Homeseer and put them in a Homeseer device, save the value to MySQL, show the value on a webpage, control the device on the webpage, save to value to Homeseer is a really inefficent way I think, but for me at the moment the only way and savest way. Maybe about some years I can do it without Homeseer....

To control devices in Homeseer from an external application I read about DCOM, but already in a earlier stadium about HsTenServer and TextSeer. Both last ones are almost the same, you can control/read a device with a http command, very easy.
I prefer a more direct command, like DCOM (standard function in Windows for communication between app(lication)s), without have to run another plugin of software application. So I can also control iTunes, which was my biggest concern. How can a start a playlist or scroll between albums as you can easily do in Hstouch?

After a few days a gave up DCOM.... Every setting was made correctly and checked 10x, but still errors when I try to control a device, grrr. All posts about DCOM I found were from the years around 2003....Maybe Windows 7/8, even 64bit was the problem? No, to look further I must add a rule in my PHP settings to add one specific dll file (extension=php_com_dotnet.dll). That's all. I found it only at one webpage......Probaly I used the wrong words to look for an solution.

Now I can starting creating a webpage. With copying samples from internet I had several ups and downs. The best way, even to learn the language is to type everything manually. Was that also the reason at school to write down everything??

Maybe for the most of us it's easy to do (and maybe you can create a website like this in a few hours), but I have to spend many days and evenings to get (the right) values on my screen.
Important is that the site is running locally, only via VPN you can run it from outside, so I don't have to concern about safety, passwords, accounts or what so ever.
For now, I can control music/speaker volume and lights with the jquery function 'knob' (You can use you finger to turn 360degrees round to control the device) and I used sliders to set the thermostate time programs.

The website will be refreshed automatically every xx seconds, but I'm also busy with div refreshing.
Also I want some charts in it, for historical data. , water, energy usage, weathersensors, etc. I would like to have is a 24h line chart were I can move some points up and down, so at that point the thermostate will go ON or OFF. In the same chart you'll see the room and setpoint temperatures. Maybe it's not possible but it's a goal.

Now in Hstouch I see a lot of information, which we don't care. More simply present of information, historical information in charts is much more prefereable.
So I made a start. The pictures are made on my iPad mini, but depending of the screen resultions, the layout of the main/white screens could be different. Without problems you can use landscape or portrait mode, without creating a new screen as in Hstouch. On my pc or 22" touchscreen everything look nice, so far. 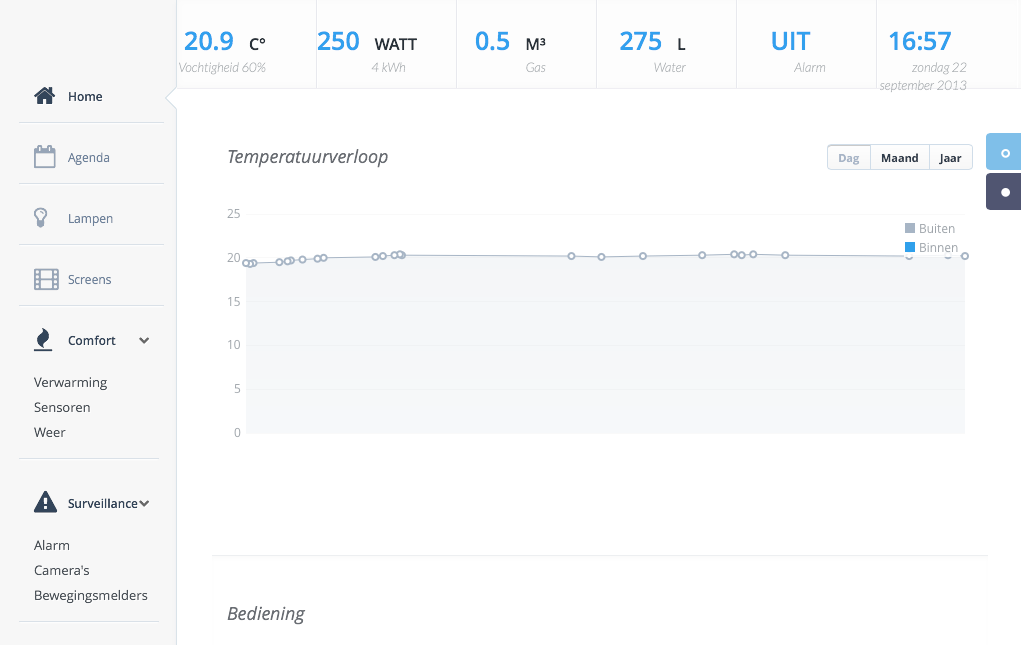 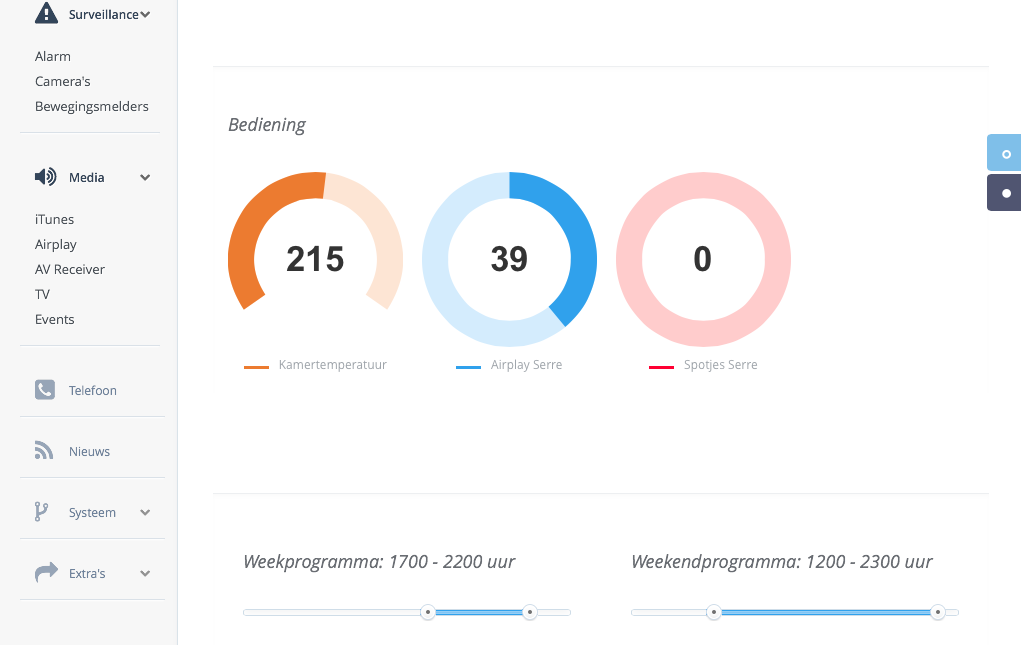 Well done on the graphics ?
Would you mind sharing those?

It cost me a lot of time, but I want to keep it simple, even I don't like 1000 different colors.
The control knobs (sort of 360 degrees 'slider') are made with jQuery. Search in Google pictures on "jquery knob" and you find these. But there are also many others, like: demo.tutorialzine.com/2011/11/pretty-sw ... s3-jquery/ or some fancy ones: designtickle.com/2012/09/dials-knobs-in ... interfaces. If it don't works, use a Chrome browser.
My project works with IOS iphones and tablets, even PC touch monitors. I have to test it again and again because not all scripts are working on every device. Even de dropdown menu's on the left are not always working standard on every device.

When all my screens are working fine, I don't have a problem to share this.
My home automation blog: https://rutg3r.com
Top

Nice Rutger, I'd love to read a little more when you are further.
groeten,
Harry
Top

Have you got some more to show Rutger?
groeten,
Harry
Top

Actually, a few weeks ago I thought it was not what I expected. I did some finetuning and shorten the scripts, but that's it. The website is also really static and not what I had in mind. It works fine on mobile devices too and it's fast enough, but could be faster in my opinion.
The problem is the lack of knowledge, so every idea must be somewhere on the www, but the biggest problem is that I don't know what I want.
So I saved this website and started from scratch. Maybe a metro interface is fine? You can swipe vertically, horizontally, some slideshows within the tiles. Much more interactive?

So the last weeks I build nothing more than I already did, but search for new ideas...
My home automation blog: https://rutg3r.com
Top

Maybe we can join ventures? Where did you find how to get dcom working? I cant access cocoontech where there is a how-to so i need some help for that. I'll then dive into this subject of the realtime website.
groeten,
Harry
Top

I must also add a rule in my PHP webserver settings to add one specific dll file (extension=php_com_dotnet.dll)

Hi Rutger, could you write down a piece of your PHP in where you ask for the status of a device. After many hours of trying I finally got DCOM working. No error in connection, but no info either. Must be doing something wrong...
groeten,
Harry
Top

Important is that you'll have to add the Dcom connection in an php section at the top of your php page (or a connection to it), for instance:
<?php
$hs = new COM("HomeSeer.Application");
?>

Then between the html tags you can use someting like this:

Thanks, did that, so that confirmed I did that right. The serach continues. Luckiliy the weather is bad so I have some time to spend on this!
groeten,
Harry
Top

I've got. Registering the dlls helps. Now it works. Lets see how to use this!

This used to be something i would want, but these days i would assume it is default by the supplier. Even a 7 year old can make a php website with bootstrap these days, so why cant homeseer make something like that? Well they did do just that, using jquery and even using the "default theme" which in my eyes is usually a big no-no. The thing with the dom/php is nice, and it will give you freedom on your system but it is totally custom made then for 1 person. Not to mention that if you want more fancy stuff in your php (html5, auto refresh, etc) it will take increasing more then and even more "only custom", bwired runs on custom created software for instance, but it works really well because its custom made for that environment. Hstouch should have been "scalable" and perhaps just plain "html5" only, that way it works on any device. The technology is already here. If you look for instance to joomla (blog software) you can combine it with http://www.gantry-framework.org/ which makes you create pages that scale based on the visitors browsers/resolution. It auto scales the dynamics.

Besides this all, it is nice work. I just hoped that HS would do that on the start or at least work on it.
// Erik (binkey.nl)
Top

One quick remark here.
HTML 5 doesn't run on any device. The browser must support it. Also HTML 5 isn't yet completly defined yet. Some functionality isn't through the RFC commitee so no fixed standard on these. And they clearly didn't learn from the past, not all functionality works the same in all browsers.
Bram
Top
Post Reply
20 posts